National Heroes Weekend, eh. For many, when they think of heroes the first thing that comes to mind would be some Superman or Batman-like individual swooping down from the sky to save the damsel in distress.

For others, they may envision Chuck Norris or Superfly delivering some karate chops to the evil criminal.

My heroes don’t fly, nor do they deliver karate chops to bad guys.

There have been many people in my life who have carried out heroic acts that redefine humanity. Today I wish to recognise two of these individuals.

About three years ago I met a guy on Facebook during the lead-up to the last election. Seemingly, on different sides of the political fence, we used to debate heavily about economics, racism and anything socially related.

After a while we found we had more in common than not and began chatting via inbox. One day he sent me a message that he had to go away for a while and our chats may not be as frequent.

After a few weeks we had a brief chat and he explained why he was away.

During his time away from Bermuda he had the opportunity to reflect on life and the challenges that Bermuda faced. Our exchanges grew more frequent and more deeper into each other’s perspectives.

One day, due to an extraordinary set of circumstances, I happened to find myself having to visit the same city as he was in. As soon as I mentioned I was heading up he gave me his address and contact number. At the appointed time we met face-to-face for the first time and sat down for hours reasoning about life’s streams.

I have witnessed my friend face an epic struggle and fight like a true soldier to conquor one of life’s biggest battles.

He has used his experiences to enrich others and bring some common-ground understanding to all he embraces as friends.

Today I salute my namesake, friend and brother. Chris Backeberg aka “Survivor”. 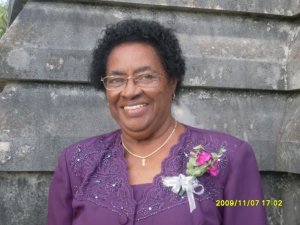 As the saying goes, last but not least. I had to reserve this spot for one of my and hundreds of other’s greatest heroes. Or in this case, “She-ro”.

In 1944 my grandmother, Catherine “Katie” Charles Famous, died suddenly in her 40s.

After her passing, her husband was left to care for their ten children. My grandfather, Charles “Charlie” Famous, being a “man of the soil”, spent most of his time tending to his fields of crops and livestock spread throughout Pembroke and Devonshire.

Among the ten children, a daughter took up the mantle of becoming the mother to her siblings, ensuring that they were clothed, fed and educated daily at Central School. Day in, day out. From can’t see in the morning until can’t see at night, she expanded all of her energy on her many children.

All of this was taking place during her formative teenage years, when she had no biological children of her own.

Every pound and shilling that she could make or save went towards maintaining her household, at the western entrance to Friswell’s Hill. So great was her magnetic love, that extended family soon became part of her household and were eating out of her pots daily.

Yet nowhere along the line has she stopped loving and caring for each and every one of the hundreds of us.

In the tradition of elders, she reminds us of our family tree and our entire bloodline, which traces back to slavery.

She still wakes daily to tend to her garden, washes, drives her own car and goes to work doing deliveries a few days a week.

No one looking at her would believe she is 90 years old.

Having never met my biological grandmother, often with tears in my eyes do I ponder what it would have been like to have been raised by her.

Then it hits me that I have a grandmother who raised me and to this day is still guiding me.

So today I wish to say thank you to my “She-ro” who dedicated her life to her family.

I wish to thank her for sacrificing her formal education so that she could pay for the wellbeing of her siblings.

I thank her for sacrificing travelling so that she could ensure her children attended college.

I thank her for never sparing the rod of her tongue so her entire family knows right from wrong.

Thank you with all my heart, Big Nana aka Big Mama aka Millie Brown. You are my “She-ro”.

One thought on “True Heroism”